A week before Eid 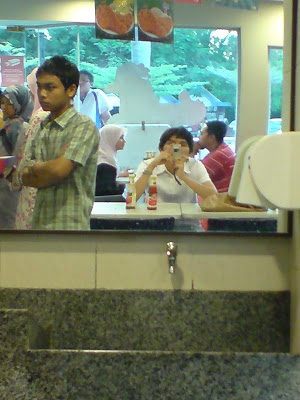 We're now inside the nights of Lailatul Qadar. As usual, during the last 10 days of Ramadhan, Muslims will try their best upgrading their level of 'ibadahs. And for another type of Muslims, they will upgrade their household, attires, kuihs, songkoks, etc for the beloved Hari Raya Aidilfitri. The heat is on and everybody is starting to feel the joy of such event. Come on people.... we shouldn't forget our first priority as a Muslim towards god. :) amin.... may u guys have a wonderful and meaningful last 10 days of Ramadhan.
20th Day - Rumah (Kujarem Day) 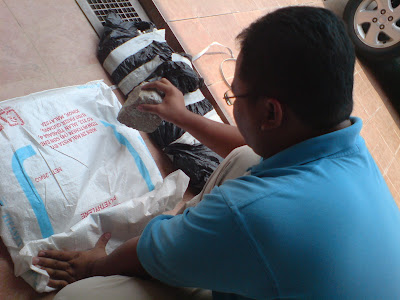 Ayun is trying his best crushing my Waste Glass
Kak Jia and Jijie called this day "Kujarem Day" ahaha.... they said that I was Kujarem on that day. But actually I wasn't, I was a bit frustated with my lab works progress. I can't start my lab works until Hari Raya. Abang Alif told me the machine used for crushing the waste glass isn't available right now. I have to wait until the second week of October in order for me to use it. Hmm.. just wait and see~ la la la~ 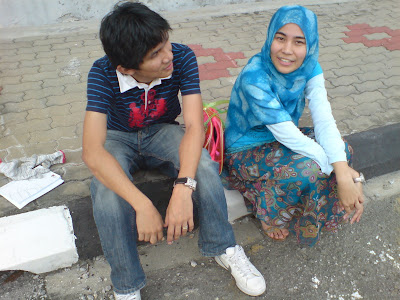 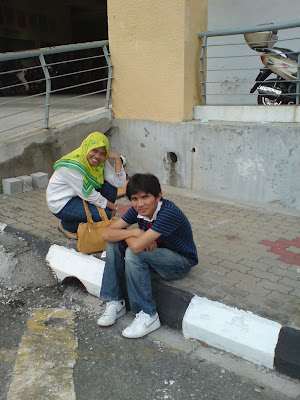 Both of them are trying their best to pujuk the Kujarem AB! haha
So I just spent the whole evening watching Azalea, Sammy, Ayun and Ziela did their lab works. Huhu... there was sumthing happened between Ziela and Mr Z! hahaha... Kujarem jugaK! kui kui kui lawak lawak~ 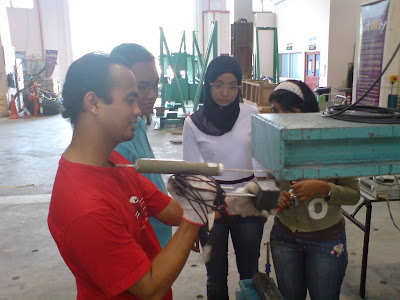 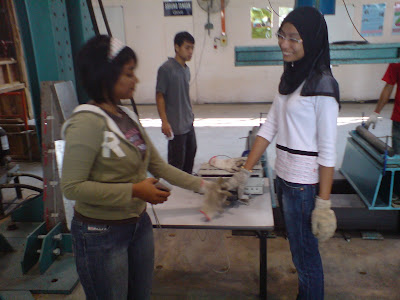 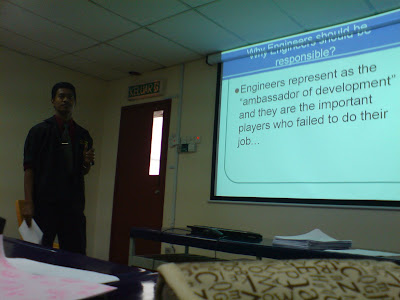 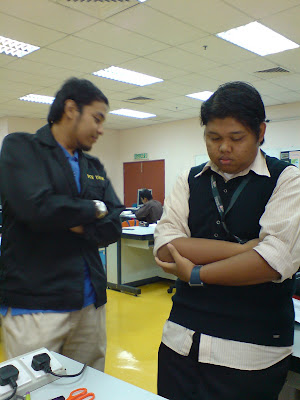 Sam memang gempak.. the only person I've ever seen sleeping while standing 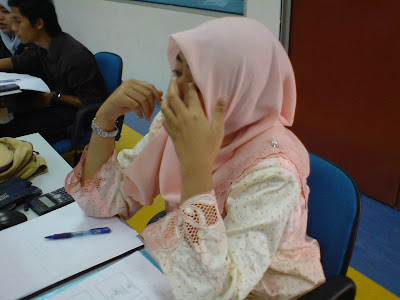 Korek2 mata! haha
I spent the whole morning accompanying and helping Kak Jia put the posters for their MPG event around the faculty. It was a bit tiring but enjoyable! Can't wait for our MPG next semester! huk huk... 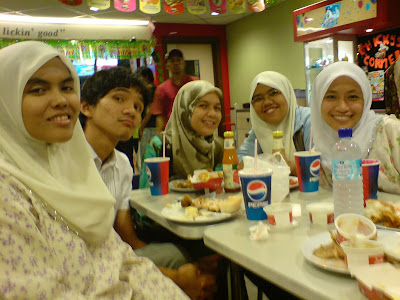 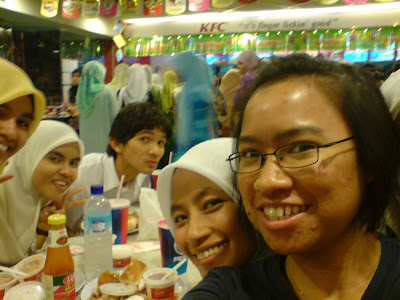 We break'd our fast at KFC Kompleks PKNS. The so called "We" is a combination of 6 of my bestest friends back in Diploma Level plus me. Huda, Edot (Bedot), Daliah, Samraa, Didie and Wan Zarina. It was a really shocking moment when I first saw Ina (Wan Zarina). That was the first time I saw her since we left our diploma level.. say about 2 and a half years ago. She's still the same same Ina that I knew before... no changes at all. Hahaha.... 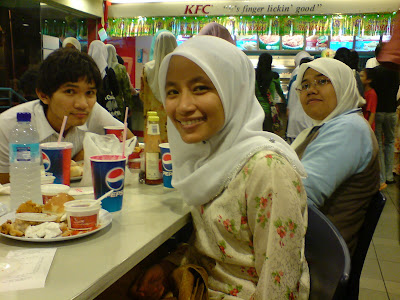 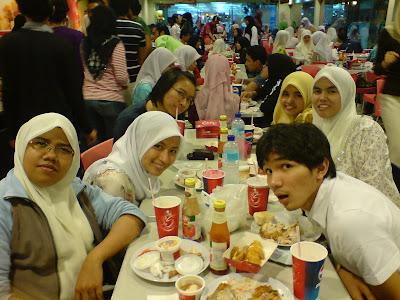 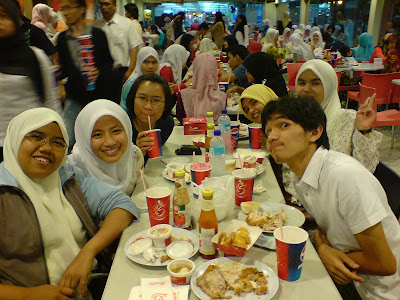 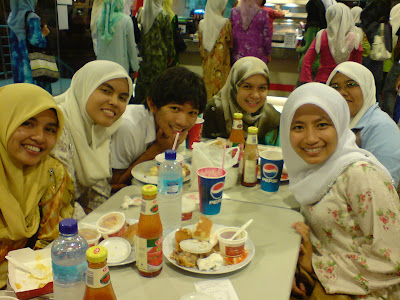 Dr Fozi held a replacement class this morning at 9 a.m. It was a combined class of 2 but the number of attendance showed that there were a lot of absentees! Anyhow we had fun! Dr Fozi's classes are always the ones that I'll be looking forward to go to! He manages to handle the classes interestingly!

Owh he made a joke yesterday regarding "Biological reason why a person B feels a lil' hotter that a person B while both of them are in the same place and near to each other" ? hahaha.. sooo lawak! But he got a point there... he always teach us general knowledge! That's why his class is never a boring one.

After the class, I attended the MPG meeting at 12 noon before going for a stroll to SACC and PKNS wit Kak Jia. She wanted to take her Baju Raya and make a reservation for two at Pizza Hut for her Break. We bought some Hari Raya cards. 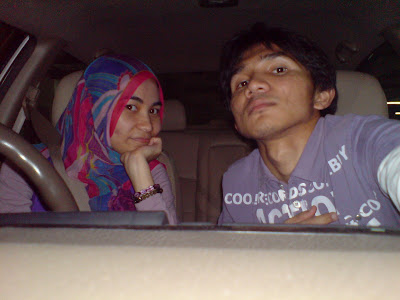 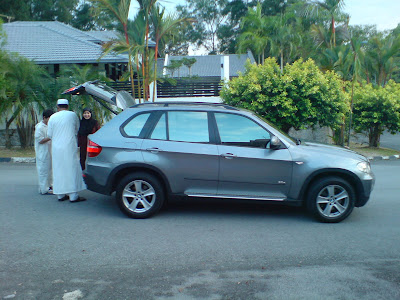 Uncle Ain's arrival
At 4.00 pm I took my mum to section 19 picking up the food ordered earlier for today's Majlis Berbuka Puasa at my house. The Majlis was for my parents' Jogging Friends and it was a memorable one. Some of those who attended the Majlis are my neighbours, old friends of my dad's and my mum's. Some of them were in the same group wit us while doing our Umrah for the past few years. I had to leave the Majlis right after solat Maghrib to catch my Environment Laboratory Test 2 at UiTM. Hmm Pathetic! cis! 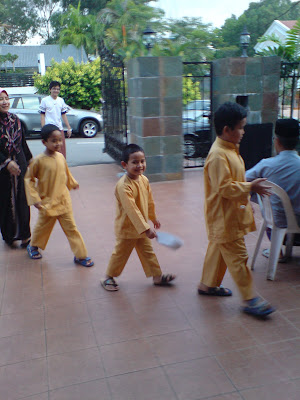 The three's stooges from our May Trip Umrah 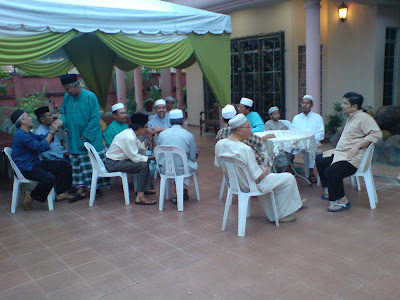 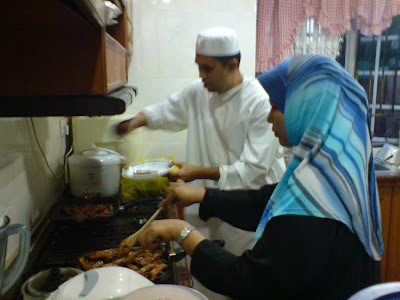 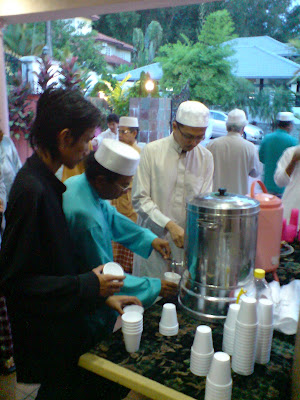 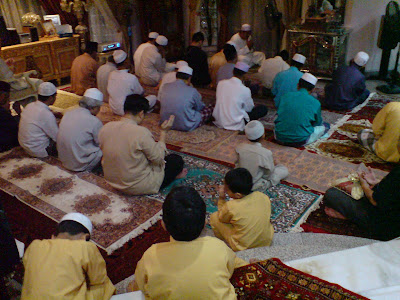