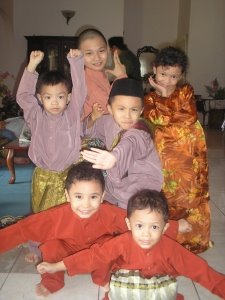 Baby Rangers!!!!!.. walaupun tak cukup ahli lagi time nie... tapi mereka terbukti sangat menggerunkan!
Well.. to tell u guys the truth... I'm still tired of the long trip home from Mecca yesterday.. but.. since it's the first day of Syawal... there's nothing I can do about it.. hockay.. first raya... I was among the earliest to wake up.

Najwa gave me my Hari Raya Card right after I got up from my TOTO.. hihi thanx ... after Subuh Prayer, I quickly took my bath in order to avoid a very long queue (Owh... there were around 20 people and only 2 bathrooms...)

I decided to wear my Orrange Raya Outfit. Haha... After having our quick breakfast, we went straight to Kampung Delek's "Masjid Lama". So sleepy laaa... aiyyo... but the sleepyness dissappeared after the imam finished his Khutbah. HAHA...

Okay back at Wan Pok's, tibelah saat emosional... sesi bermaaf maafan di antara sanak saudara. Owh.. this year I received lesser "Duit Raya"... hurmm.... benci!!
Then... from Wan Pok's house... It's time for Nenek's house... owh.. F.Y.I... I think I'm one of the luckiest person in the whole world whenever it is Hari Raya!! since my father's house (Nenek) is verrrrrrrrrrrrry near to my mother's (Wan Pok) hurmm.. maybe 750 metres. 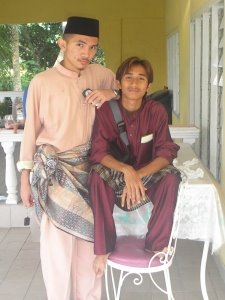 Wit Angah
At Nenek's, I did the maaf maaf things gak before we ate and took some photos. Owh.. more photos will be added later since we didn't bring our battery charger for the camera yesterday.. so.. tpakselah nyentil nyentil je kat gamba gamba dari kamera orang lain.

Next, we went to Sepang to visit my Abah's old boss. It has been a tradition to us to visit him on the first day of Hari Raya each year since the contribution he made for my Abah while he was still servicing in the army. Uncle Kamarudin and Auntie Zainab.... they're a very kind couple... huhuhu..

Back from Sepang, it was raining heavily... aiyyo.. takut takut..... and my Abah drove extracarefully which made us reached Wan Pok's house late!!! Owh... I'm so happy to see Uncle Lee, Acik Idah and Pak Ngah there at Wan Pok's!!! rasenye dipisahkan 2 minggu tak jumpe dah sangat merindui... =)
Posted by aB at 1:38 PM