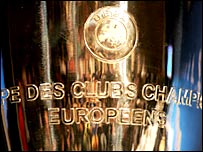 I woke up early today... quickly turned the PC on and visit UEFA's official website. Owh.. like I guess, the main page was about UEFA Champions League draw last night. Arghh.... a bit nervous to check out which team falls into the same group wit Arsenal... finally.. hurmm... Arsenal is in group G together with Porto, CSKA Moscow and Hamburg.. hurmm... can't say much about this group... Porto and Hamburg could be dangerous. Porto was Champions League winner back in 2004 (I think ngengenge).. and Hamburg seems to be another tough team from Germany who is doing quite well in Bundes Liga currently...

Other groups that might be interesting are group A (Chelsea and Barcelona...), group B (Inter Milan and Bayern Munich), group E (Real Madrid and Lyon), and group F (Manchester United and Benfica..).. Owh can't wait to see UEFA Champions League starts!!!
The complete draw....