Kerol picked me up at 10 in the morning. Kerol wanted me to accompany him sending his cousin to KL Sentral. After sending him, on our way back, I called Papa and invited him to join us for lunch at Darul Ehsan Section 8.

While we were chit chatting, a Kelisa passed by... 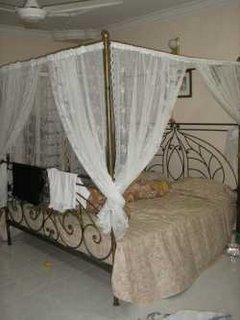 My New Katil... hehe
Back home, wit nothing to do, I've decided to do some kind of major modification on my room!! aha.. bega bega bilik ni sikit. Owh... I got new bed!!! classical style.. cheylleh. Hahaha.... Abah helped me wit the katil.. owh so heavy laaa..... I'm just a skinny minny man lah kaN? hahaha... done wit the bed, Abah left me alone kemasing my room. Oh... nevermind~at last!! I managed to complete my modification before I got some sleep (So tired maa)...

Mak's voice woke me up. She wanted me to drive her to Section 9 . She wanted to pick the pizzas she ordered earlier at Domino's Pizza. I drove her there, took the pizzas, sent her back home, then, to the field... FOOTBALL!!! huhuhu..... hey, we played at Joe's field and gues what? I scored!!! Hahahaha.... playing in Joe's field really made me bored. Playing about 20 players aside, wit smaller field and goal post, arghhh.... forget it!!! I hate playing there. hihi....

Night time, picked up Ilah and Shaki at Shaki's. We had our dinner at McDonald Section 3. Ilah bought me some nuggets. Thanx Ilah~!!! haha.. saw Shaffiq Hamzah and hurmm.. some one familiar.. ekekeke.... we had a really quick dinner before rushing to Ilah's.

At Ilah's tution... jeng jeng jeng. everybody was happy I guess coz the class was filled wit happiness chelleh. except for Fatihah I think who looks verrry quiet. Haha... dunno why laaa.... owh.. Zudi was really comel tonight!! dunno why.. and he was soooooooooooo nice. Haha... Ilah gave him a pen and paper and he was like busy drawing and writing throughout the entire class. Haha.. hey, he even used the ruler okay!!! and he kissed me~ chuck!!! hihi.... and everybody seemed jealous wit it, especially Athirah and Asilah. kah kah ;p (owh.. after that I saw Athirah plak suruh Zudi cium die.. heh.. tiru aje.... ;p)